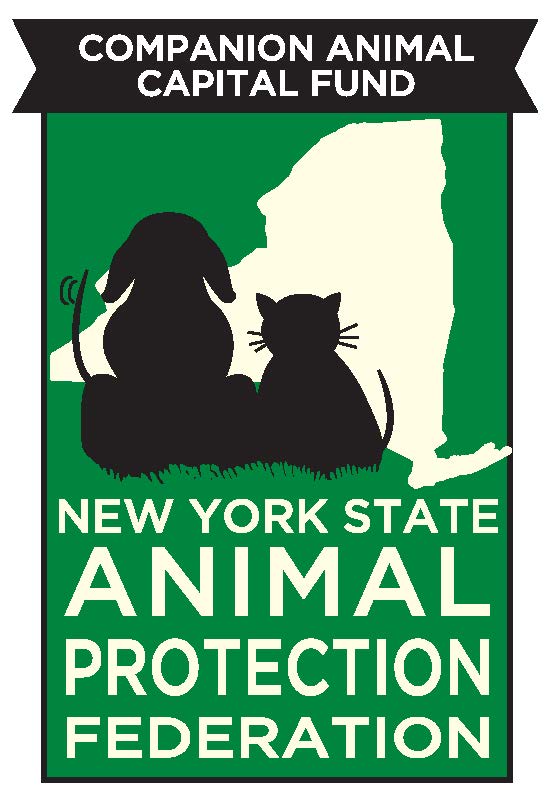 By CommunicationServices April 17, 2017 No Comments
Communication Services runs the New York State Animal Protection Federation. As its executive director, Communication Services’ President and Strategist in Chief, Libby Post, has been working with state legislators, the NYS Dept. of Agriculture and Markets, animals shelters and animal advocates to establish the first in the nation $5 million capital fund for New York’s animal shelters. Below is the press release announcing the success.

Responding to the overwhelming need to assist the state’s humane societies, SPCAs and nonprofit and municipal animal shelters with their efforts to improve their building and equipment, the New York State Legislature and Governor Cuomo included the $5 million Companion Animal Capital Fund in the 2017-18 State Budget.

In its yearly survey, the NYS Animal Protection Federation found that there are 15 shelters with over $50 million of capital needs–from building new shelters to renovating dog kennels and expanding cat areas to upgrading medical facilities. The Companion Animal Capital Fund will enable eligible sheltering organizations to focus their fund raising efforts on providing updated and upgraded facilities that will enhance animal care and health, increase humane education and create more companion animal adoptions.

“New York is now the first state in the nation to provide capital funding for animal shelters,” said Libby Post, Executive Director of the New York State Animal Protection Federation. “The Fed proposed the Companion Animal Capital Fund and greatly appreciates the leadership of Assembly Member Deborah Glick (D-66) and State Senator Phil Boyle (R-4), both of whom championed the bill in their respective houses. There are over 80 shelters across the state. Our 2017 survey showed a $50 million capital need at just 15 of them. With Governor Cuomo’s support, this funding will enhance the lives of companion animals in New York and make a substantial difference for animal shelters across New York.”

“The ASPCA is incredibly grateful to Governor Cuomo and the legislature for authorizing a much-needed $5 million capital program for animal shelters in New York State,” said Bill Ketzer, ASPCA Senior Director for the northeast region. “These not-for-profit sheltering organizations provide vital services to local governments and their communities, not only caring for homeless animals but offering “safe harbor” pet retention programs for victims of domestic violence, agility and training programs and holding of animals as evidence in criminal animal abuse cases.  Traditionally, shelters do this with very little state support, but thanks to the hard work and perseverance of the New York State Animal Protection Federation, Assembly Member Deborah Glick and State Senator Phil Boyle, New York is sending a message to the rest of the country by ensuring that these valuable community resources will continue to help animals in need and serve the public for many years to come.”
The cost of a municipal sheltering contract is far less than establishing and maintaining a government-operated animal facility. Not-for-profits, SPCAs, humane societies, and other animal organizations provide this vital service to local governments under contract, often saving them both time and money. Shelters have traditionally performed these functions with very little state support and many of these facilities haven’t had building renovations in several decades.
State Agriculture Commissioner Richard A Ball said, “We are pleased funding for the Companion Animal Capital Fund has been included in the New York State Budget. With Governor Cuomo and the Legislature’s support for our animal shelters, municipalities and non-profits across the State will have the opportunity to make much-needed improvements and upgrades to their facilities. This will greatly impact and provide for New York’s companion animals while they await their new home.”

“Our companion animals are part of our families. Thousands of New Yorkers go to their local animal shelters each year to adopt dogs and cats.  These shelters work tirelessly to provide excellent animal care yet many across the state are in desperate need of resources to expand facilities and upgrade equipment,” said Assembly Member Deborah Glick (D-New York). “Since State law requires the presence of animal shelters in our communities, it is only fair that New York make a modest investment to ensure these facilities are able tdo successfully care for lost, unwanted, and abused animals.  I’ve been honored to work with great advocates including the New York State Animal Protection Federation and the ASPCA.”

“Two years ago, after speaking with my constituents, I took the proactive lead to push for the creation of this Companion Animal Capital Fund,” said State Senator Phil Boyle (R-Suffolk County). “This $5 million investment – the first of its kind in the nation – will provide humane societies, nonprofits, and municipal shelters the ability to apply for capital project funding through a competitive grant process. These projects will allow for high quality improvements so animal shelters can provide better care for companion animals and offer increased resources for those looking to adopt pets. I commend the NYS Animal Protection Federation, the Humane Society of the United States, the ASPCA and animal shelters throughout the state for their tireless advocacy on this issue. And, I want to thank my Senate colleagues, especially Majority Leader Flanagan, the Assembly, and the Governor for passing a budget that includes this fund.”

The Companion Animal Capital Fund will be administered by the New York Department of Agriculture and Markets. Projects will have to be shovel ready and the shelters will have to provide matching funds in order to show the readiness of the capital project.
–30–
About New York State Animal Protection Federation
The New York State Animal Protection Federation is the voice of all the non-profit and municipal animal shelters, humane societies and SPCAs across the state. The Federation serves as an educational and policy-development resource and through a united voice, promotes favorable legislative initiatives. For more information, please visit www.nysapf.org and follow us on Facebook. You can also download our app on New York State’s animal laws by search for Animal Laws of NYS at the App Store (iPhone) or Google Play (Android).
About the ASPCA(R)
Founded in 1866, the ASPCA(R) (The American Society for the Prevention of Cruelty to Animals(R)) is the first animal welfare organization in North America and serves as the nation’s leading voice for animals. More than two million supporters strong, the ASPCA’s mission is to provide effective means for the prevention of cruelty to animals throughout the United States. As a 501(c)(3) not-for-profit corporation, the ASPCA is a national leader in the areas of anti-cruelty, community outreach and animal health services. For more information, please visit www.ASPCA.org, and be sure to follow the ASPCA on Facebook, Twitter, and Instagram.